2017 begins with much hand-wringing and nervous anticipation of what the future portends for democracy, liberal values and even human rights. If 2016 brought Brexit, the election of Donald Trump and a backlash against cosmopolitan visions of a globalising and open economy and society, the fear is that further shocks are in store from the right wing populism of Geert Wilders in Holland and Marie Le Pen in France. A new and dangerous mood of intolerance, fear of the other and a more exclusionary, xenophobic politics and protectionist economics seems to be in the air.

When one drills down into the data and reasons behind the Brexit vote and Trump ascendancy, it is clear that a large proportion of those voting against the status quo are in large part voting against the alienation and marginalisation wrought by three and half decades of rampant economic globalisation. Old industrial areas in Europe and North America, where voters feel that their economic concerns about industrial closure, the flight of business to low wage countries overseas, and concerns about the job threats posed by immigrant workers, are ignored by a cosmopolitan elite that espouses free trade, labour market flexibility and deregulation. The loss of economic control and voice by many communities is leading to a rejection of the existing political order and a willingness to support populist ‘outsiders’ who successfully fashion simplistic yet ultimately flawed political and economic narratives.

Against this backdrop, there is much discussion and commentary about the perceived crisis of liberal political democracy, but a largely unconsidered element is the state of economic democracy. If it is the economically marginalised and alienated; old working classes in deindustrialised areas from South Wales, to Nord Pas de Calais, to Ohio and Michigan; that are voting for right wing anti-establishment populists, perhaps we should be asking more searching questions about the nature of the economy itself. How democratic is it? By which, we mean, how well dispersed is economic decision-making power and how much control and economic security do people have over their lives? After all, and particularly in a world of employment casualization, zero hours contracts, Uber and the Gig Economy access. to decent work and a sustainable family income remains the main fault-line between winners and losers from globalisation.

When academics and activists use the term economic democracy, they usually have in mind levels of trade union influence in the economy and the extent of collective and cooperative ownership. These remain important indicators of how economic decision-making and control are spread or concentrated across an economy. In their work, (http://classonline.org.uk/pubs/item/the-importance-of-the-labour-movement-in-tackling-inequality) Richard Wilkinson and Kate Pickett have demonstrated the continuing importance of strong trade union movements, capable of pushing up the wages of the most disadvantaged, to tackling inequality. However, we wanted to establish a much broader set of measures to compare economic democracy across countries.

To this end, with funding from the Economic and Social Research Council, we have constructed an Economic Democracy Index across the OECD countries (Figure 1). The Index measures levels of economic democracy across 32 OECD countries, for the latest available data (2013), minus Turkey and Mexico for which there is too much missing data for an accurate assessment.

For the richer developed economies, what is striking is the basic difference between a more ‘social’ model of northern European capitalism and the more market-driven Anglo-American model. The Index captures the continuing differences between the former, with their higher levels of social protection, employment rights and democratic participation in economic decision-making and the more deregulated, concentrated and less democratic economies of the English-speaking world. The US ranks particularly lowly with only Slovakia below it, but the UK too is only 25th out of 32.

The Index also highlights the comparatively poor levels of economic democracy in the ‘transition’ economies of Eastern Europe; the one very interesting exception being Slovenia which merits further study, and might reflect both its relatively stable transition from communism and the civil war in the former Yugoslavia, and the continuing presence of active civil society elements in the trade union and cooperative movements. Southern European economies also tend to rank below northern European countries, as does Japan.

An important set of issues relates to the rise of a more xenophobic politics and its relationship to changing levels of economic participation and empowerment. From a more normative perspective, how far might an agenda around a deepening of economic democracy address the concerns of those who feel they have been left behind by processes of global economic restructuring?

A striking finding from our research in this respect is the strong and statistically highly significant relationship (at the 99.9 per cent level between the Index and rates of poverty and inequality across countries (Figures 2 and 3). Countries that have high rates of economic democracy have lower levels of poverty and inequality. While other factors are also involved, these findings are striking and suggest for example that the attack on trade unions and policies of labour market flexibility (that reduce individual employment security and cut welfare benefits) advocated by the OECD itself until recently, and pursued most enthusiastically in the Anglosphere, may actually drive up poverty and inequality. 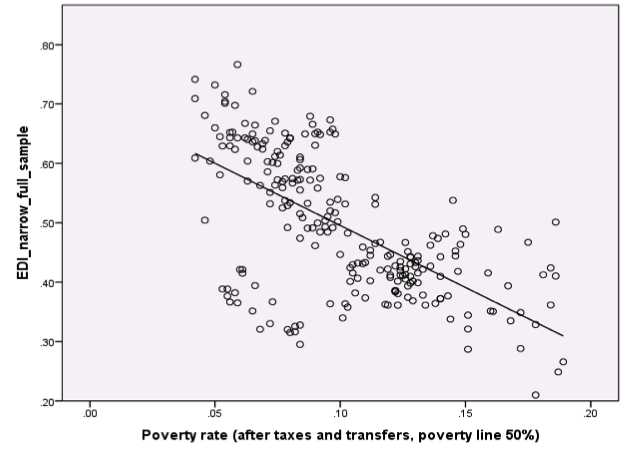 Countries with high levels of economic democracy such as Norway, Denmark and Iceland have much lower levels of poverty than countries such as the US and UK. While far right populism is on the march everywhere, including the Nordic countries, the greatest backlash against the global elite, as evidenced by Brexit and the Trump ascendancy and the more serious shift to the far right in Eastern Europe, is in those places with diminishing economic security and rights at work, lower collective voice by actors such as trade unions and cooperatives, and high concentration and centralisation of economic decision making in the hands of financial, political and corporate elites.

(Universities of Glasgow and Nottingham Trent)

The research here hopes to develop a pioneering inter-disciplinary conceptual framework which reconfigures collective action and public discourse in economic decision making for advancing the common good over vested interests and for promoting individual economic and social rights above those of core financial and political elites that increasingly dominate the social, political and economic spheres of contemporary society.